ATRs, the unrepresented -- no elected representatives in the UFT

"The right of voting for representatives is the primary right by which other rights are protected.
"To take away this right is to reduce a man to slavery, for slavery consists in being subject to the will of another."
Thomas Paine, First Principles of Government

DOE teachers: considering retirement?: It's not just the 20 years you want to pass; age an important consideration

Considering retirement? The dearly departed Chaz, generous, resourceful, humorous, long may his memory live and his lessons for us.


--Especially also his financial tips.
Let us recall his tips. Some things to consider: be sure to read again his posts on pensions, the tiers and retirement.

Everyone says be sure to pass your 20 years in the NYC DOE, to improve your pension.

BUT, be sure to consider also age. The older you get, the better your payout, according to these charts on Tier IV and Tier VI.

From back in 2014: "A Simple Chart To Determine Your Tier 4 Pension."
Lots of factors to consider, as the above article indicates.
For example:
"Age Correction Factor: No educator can receive a regular pension before the age of 55. Between 55 and 61 years of age, the pension is reduced by the age correction factor. However, if the educator is part of the 25/55 program or has completed 30 years of service, no age correction factor is used." 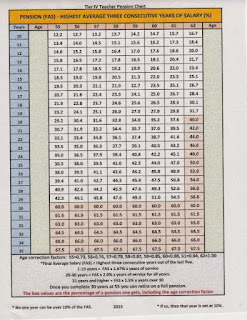 Tier VI is an outrage. However, few ATRs are Tier VI. 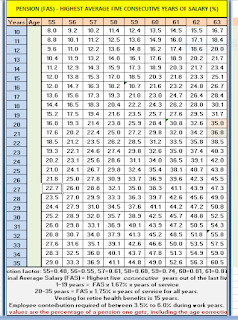 And a few months, later, a Chaze post on the Tier VI pension: "The Tier VI Teacher Retirement Game Is A Sucker's Game."

Admirably, the New Action caucus started a petition (around 2019, assuming from when the following blogpost was) for helping the Tier VI employees. From late November 2019: "Comparing Tier VI To Tier IV Pension"

Another appreciation of the widely appreciated Eric Chasanoff

The passing of Eric Chasanoff (Chaz School Days) was a sobering event for myself and many NYC teachers. We relied on him for reporting accurate, timely, information about NYC education policy, incompetent and corrupt supervisors, and the Absent Teacher Reserve. He was one of a few bloggers that gave us a voice, when our union told us we "were lucky to have jobs". I remember meeting him the first time more than ten years ago, while being an ATR on regular rotations. Having been sent to a now defunct Queens HS, I was told to sit in the boiler room until I was called to cover a class. For a few days, I sat in glorious solitude beside the depression era boiler, until one morning I found an interloper had intruded my sanctuary....he event had the chutzpah to take my seat on the decrepit couch! He introduced himself only as Eric, an ATR earth science teacher. We began talking about our pariah status; he explained how "Fair Student Funding" was a major reason for the debacle, and how Bloomberg's "Leadership Academy" trained sapling pedagogues with no "institutional memory" to become cogs in the new business model. Our stories unfolded in similar fashion, as we were both science teachers from large community high schools in Queens. I asked him if he read "Chaz School Days", as I found it informative; he laughed and said ""Read it? I'm Chaz!...I write the damn thing. Thanks for reading my blog!" That was Eric, never grandstanding or grabbing headlines. In fact, I doubt most Principals even knew he was rotating through their school. Rest in peace Eric, you have guided many of us... WJP
Posted by ATRs at 1:02 AM No comments:

Email ThisBlogThis!Share to TwitterShare to FacebookShare to Pinterest
Labels: ATRs, UFT, voice of the voiceless teachers

Baruch Dayan Emes ("G-d is the True Judge"). I am overwhelmed with grief at this terrible news. Eric was a caring and knowledgeable educator, whose talents were squandered by the irresponsible cretins at the DOE. Moreover, he was our Navigator, providing a steady hand and a guiding pathway through the dark waters of the criminal enterprise known as the DOE and its henchmen at the UFT. He comforted those newly accused of deeds they never did, statements they never made, and helped them formulate a survival plan. He had access to information from the DOE and UFT that others did not, and generously shared it with others in a clear and concise manner. Even after he retired, he continued to provide invaluable guidance about retirement and pensions. Eric's blog here was always my first stop in the morning, coffee in hand, learning the latest about how far the school system had fallen under the blundering aegis of first Bloomberg and then De Blasio and just shaking my head in disbelief and disgust. Eric, you took upon yourself a tremendous responsibility in laying bare the lies of the DOE and UFT and you carried it off brilliantly. Yours will be a hard act indeed to follow. I hope that your family will derive comfort on their tremendous loss and that you rest in peace eternal. Rest in peace, Eric Chasanoff, 1951-2020, teachers' advocate.
Posted by ATRs at 7:10 AM 1 comment:

Email ThisBlogThis!Share to TwitterShare to FacebookShare to Pinterest
Labels: ATRs, UFT, voice of the voiceless teachers

The UFT is holding its annual meetings for ATRs Friday, November 22, Monday 25, Tuesday 26 at its boro offices. All meetings are 4:30 pm to 6:00 pm.
This is for DOE staff in excess; so this includes guidance counselors, social workers and librarians, in addition to teachers?


But why so late this year? Was it waiting for some lag time after its double dues dipping from the October retro payment and member frustration subsided?

Retro coming next week, & again UFT's double-dipping on the dues

Just to remind folks: NYC held out against giving teachers a contract after Randi Weingarten's 2005 epic giveback contract.  Costs of NYC living climbed in the years since that contract ran out, but the new 2014 contract stretched out the raise slowly. Plus, the retro pay, the raise we should have gotten was illogically spread out --to 2020!
So, of course, yet again, the Tier VI teachers will scratch their heads and wonder what this retro talk is.

Each time we have been given a retro payment the UFT has dipped in for dues once for the twice a month paycheck, and a second time for the giving us the retro. The union claims that this was for the work of negotiating the contract. But the UFT needs to be rewarded multiple times for this?

Be forewarned: next week you will get a retro payment, your next to last retro payment. (The last will come in 2020.) But you will see dues taken out twice -yet again!

NYCDOE & UFT up to same BS: job crumbs at best for ATRs

So, it's the end of the summer and the same thing has happened:

Earlier in August the NYC Department of Education shut off the open market transfer for a few days and then reopened it. (The farce of the transfer system is addressed here.)

The DOE has held a number of job fairs over the summer and it has not informed actually licensed and experienced teachers (teachers in the Absent Teacher Reserve - ATR) of these job fairs. The job fairs in the last weeks of the month have positions in the hard to staff schools and in the harder to fill licenses: science, special education.

The DOE has the gall, once again, to hire inexperienced newbies over the ATRs who wish to actually teach as they had done for years, before Randi Weingarten gave up the seniority transfer in 2005 (referred to here) and the United Federation of Teachers got teachers to go along with this.

The UFT challenges none of this; and it goes by the same script that it is up ATRs to get a job, when everyone knows that salary is what keeps them from being considered. Adding insult to injuries is that the UFT also crows about 3,000 new teachers being added to the teaching force. (Really, they are happy about adding 3,000 people who will pay dues; so the union actually has an incentive for the city to add newbies into jobs that experienced teachers could have.)

Forget about the line that the NYCDOE/UFT uses: that ATRs won't factor into raising average teacher salary in the school budget. Admins are smart. They know that whatever good budget arrangement that exists this year could be turned around in a future contract. They know that the formula could change three years down the road and the school will have to pay for the more expensive teacher. So, the school administration plays it safe and continues to go for the new, inexperienced teacher. This is why teachers with many years in the system will not get picked up by schools.

Of course, there is an age factor here: the ATRs tend to be over 35 years of age; most: over 50 years old. The newer teachers are in their early or mid-20s.

As to teachers in the reserve that will be placed into positions as opposed to just being assigned to schools in September: the DOE waits until the last possible moment, less than a week before school starts, to inform teachers of which school they will be assigned to. Furthermore, the notice omits information as to which topics they will be teaching. Memo to admins from people that actually teach in the classroom: different grades mean different curricula. Contrast this with other teachers who are informed at the end of June as to what their program will be. All of this means hastier preparation in the days before students return to the classroom.

All of these practices under De Blasio and Carranza are no different from Bloomberg, Klein and Walcott. Actually, some practices are worse under Carranza: giving insanely inflated raises to top administration. Several high level admins got raises ranging from 15 percent to 35 percent --compare this to the two to three percent salary raise in the last teachers contract. There was news last Saturday that there are now 36 administrators earning over $200,000 per year, a greater than 50 percent increase over the number of DOE admins earning that kind of salary in the last fiscal year. So, if the city has the money to give administration favorites, then why isn't this money given instead to the teachers who are in the classrooms?  The NYCDOE/UFT cannot in good name continue to go by the script that there is no money for reverting to the teacher unit system (pre Fair School Funding) when it spends this kind of money.

The UFT needs actually advocate for its members: it needs to press the city to go back to the system that worked in the past: valuing experience. The union needs to give preference to the ATRs, not to the inexperienced.

Official UFT ATR meetings where
the UFT will discuss
placements and evaluation
and other questions we may have.

Which plan for observations will be put under? The one for probationers?

How can we can the DOE place us
without getting proper Danielson training and new technology practice?

We'll be compared against teachers who entered the system after Danielson was introduced. To add insult to injury, we often did coverages for teachers who were out if the classroom for such training.

Will principal's have a say, and will we be Funded from the central budget?

And will the UFT allow the DOE to cynically hire new people during the summer, as they do every year? The new contract says nothing about eliminating Fair School Funding which incentivizes against hiring experienced teachers.

Watch ATRs mainly get placed in schools that were unable to find anyone before Labor Day, unintroduced to their their program or room.

The key ingredient in the disappearing of older, tenured teachers from NYC schools

In the DOE's mind, in the media's mind:

The interest-free loan to the DOE

Displaced Los Angeles teachers and other issues for L.A. teachers

Housed teachers, UTLA's support page for those in "teacher jail"